I know that summer is barely underway, but if anyone has any whereabouts of a prosthetic arm that goes to about mid-bicep please let me know.

Yeah, laugh it up.

I’m handicapped, drank too much, and lost my arm on a booze cruise. It could’ve happened to anyone. Unfortunately, it ended up happening to the guy who has managed to lose his prosthetic arm on two separate booze cruises.

I’ve provided a sketch of my missing prosthetic, but keep in mind that I lost my former dominant arm and it has been years since I’ve drawn with my left hand. It’s no Mona Lisa so don’t laugh. 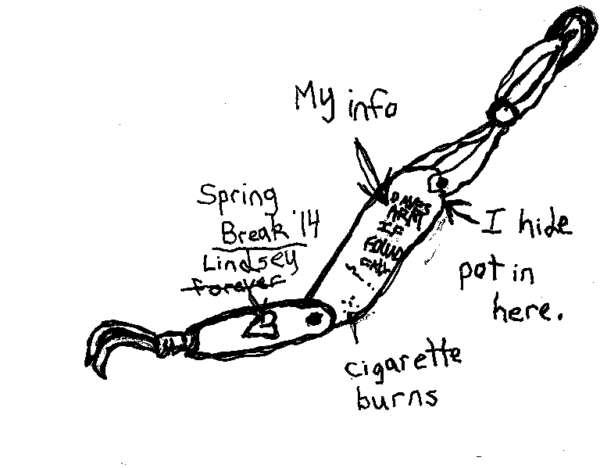 Now this is what my prosthetic arm looks like. It has some key identifying features and a gift (if it’s still there):

– A Heart Drawing on the Forearm: This was from a spring break fling that should’ve lasted forever, but died once the jello shots were gone and the Hawaiian Tropic booze cruise hit shore.

– Cigarette Burns on the Upper Elbow: Self-explanatory. My arm can double as an ashtray if there’s no butt hut around.

– My Contact Information on the Bicep: If my arm is in an English-speaking country, follow the instructions. If it ain’t, welp, I guess I’m out of luck. My arm was a hell of a bottle opener and a great icebreaker at parties.

– Shoulder Pot Pocket: Given my situation, I’m sure you understand that I know how to party. My reward for you will be the pot I have stuffed in the pocket where the rest of my arm and my prosthetic arm would meet. That’s right, those moist dank nugs are all yours if you can return the arm to its rightful owner. 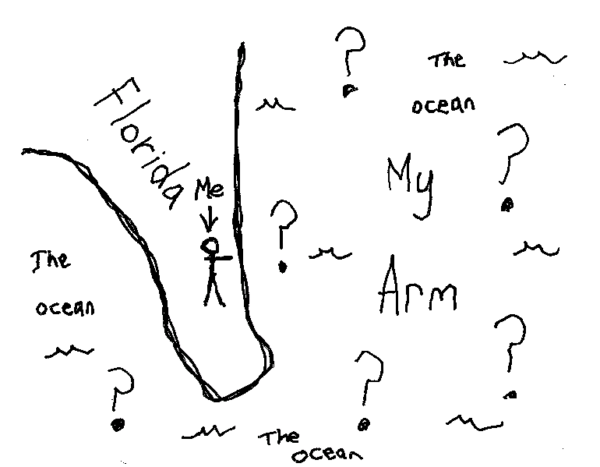 As far as my arm’s last known location, that’s where things get fuzzy. I know I dropped my phone into the water while we were docked, so I took off my prosthetic arm and fished it out. Once I fished out my phone, the party pontoon set sail and I completely forgot about putting my incredible kabob/roach clip/prosthetic arm back on.

Once we docked, I sobered up and noticed my arm was no longer hanging from the railing. I was too embarrassed to say anything because my friends are (unfortunately) used to me losing my appendage when alcohol is involved… and they also know how I originally lost my arm at an MTV Beach House in the 90s.

Anyway, the worst part about my problem is that I live in Florida, meaning that my arm is possibly floating around somewhere in the largest body of water on earth – and that’s a lot of ground to cover. There’s a high possibility that my prosthetic arm is somewhere in the ocean and this needs to go viral. I can eat the loss of my weed, but that prosthetic arm has sentimental value.

So even though the season hasn’t even really started yet, why not kick off your summer with kindness by lending this amputee a hand and help me find my arm. 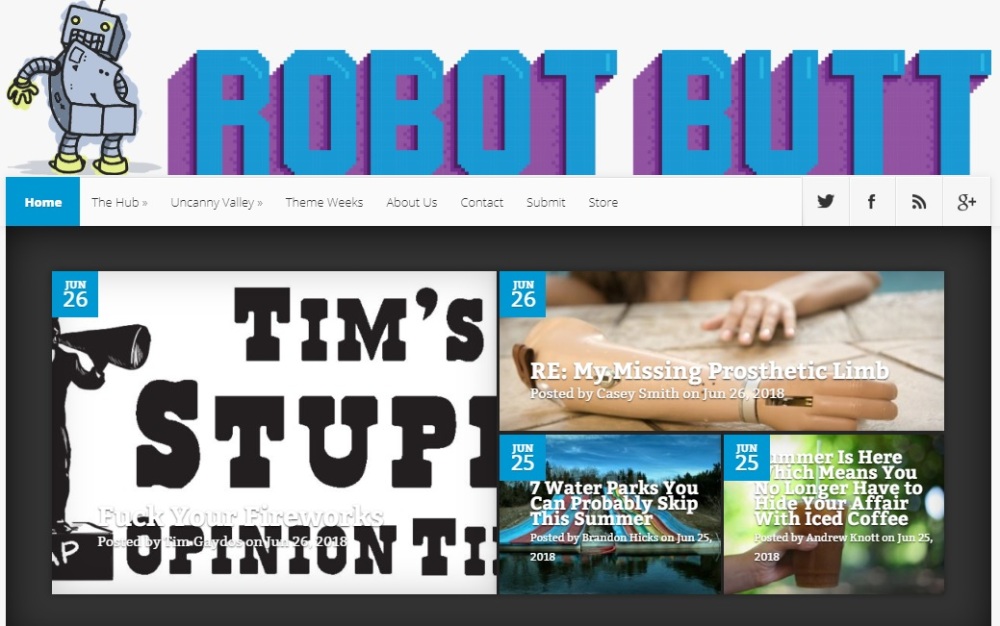 Click the image above to view “RE: My Missing Prosthetic Arm” on Robot Butt.

Bonus: Robot Butt and one of my former Second City coaches (Caitlin Kunkel) just had a fantastic piece written about them (and others) in The Writer Magazine. The magazine is over a hundred years old and it states that they’re the “gatekeepers of contemporary comedy”. It’s great stuff to read here.